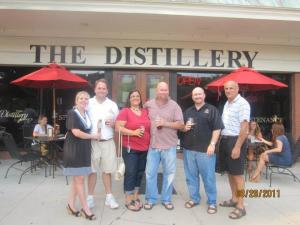 I’ve been home brewing since 1995 when I received my first homebrewing kit as a gift.  From early on I dreamed of opening a brewery (as I think a lot of homebrewers do), but usually I did little to pursue the dream.  Back in 2009, my family moved from Atlanta to Savannah and that’s when everything finally got put into motion.

By the spring of 2010 I had put together a skeletal plan of how to get things started and I convinced my brother to invest in the dream.  I decided the first beer would be an American Brown Ale as a nod to my homebrewing roots, since this style was developed by American hombrewers as an adaption of the English Brown Ale.  In February of 2011 we began producing test batches at Blue and Gray Brewing to scale up the recipe from 5 gallon batches to 600 gallon batches.  By summer of 2011 we had perfected the recipe and we set a date to bring the beer to market.

Coastal Empire Beer Co.’s Savannah Brown Ale was first shipped to Savannah Distributing on August 25, 2011.  We officially launched at the Distillery on, Sunday, August 28, 2011, the first night of the first Annual Savannah Craft Beer Week.  The following Saturday Savannah Brown Ale took home first place in the People’s Choice Award at the Savannah Craft Brew Fest.  That made our first week on the market greater than anything we had hoped for.

We hold regular tours and tastings at the facility, so please check the link for times and a map to our location.

We hope that each of you enjoy the beer as much as we enjoy crafting it!